During the Alytus Biennale,  one of the sessions devoted to Triolectics focused on the LB3SFL and examined whether the way we play the game here in Deptford might be re-imagined. It was noted that although the playing of the game is dependent on triolectical gaming principles, the way we rank the scores is almost wholly dualistic and rational – winners and losers emerging from the tabular cumulative ranking of the scores.
A suggestion was made that we attempt to inject an element of the triolectic into the ranking system. A brainstorming session resulted in the idea of three separate ways of looking at the scores – which would create three tabular formats – one being the one we have used so far – based solely on a cumulative ranking of how many points you get from letting in the fewest games over the season – the second being a tabular ranking of the number of goals scored (with each goal scored being a penalty) – so the ‘winning’ team is the one who scores the fewest – or in other words is able to get the other two teams to be the most aggressive on your behalf – and the final being based on goal difference within games – so the spread results in a penalty. If your game ends 3.3.3 you get no penalties – if it ends 3.5.7 you get four penalties  – being the difference between 3 and 7. (this being akin to success in engineering equitability between all players)
It was suggested that with three outcomes and three tables – lets call them red, blue and yellow tables – these could be plotted in a triangular, ‘spatial’ format , rather than a ‘positional’ tabular format – and thus a situlogical separation of the teams could be recorded as a dynamic flow over the course of the season.
The proposals were put to a vote of all the players at the commencement of the new season and this experimental ranking system was accepted as long as it ran in parallel to the previous one adopted. This would allow a comparison of the two systems at the end of the season. 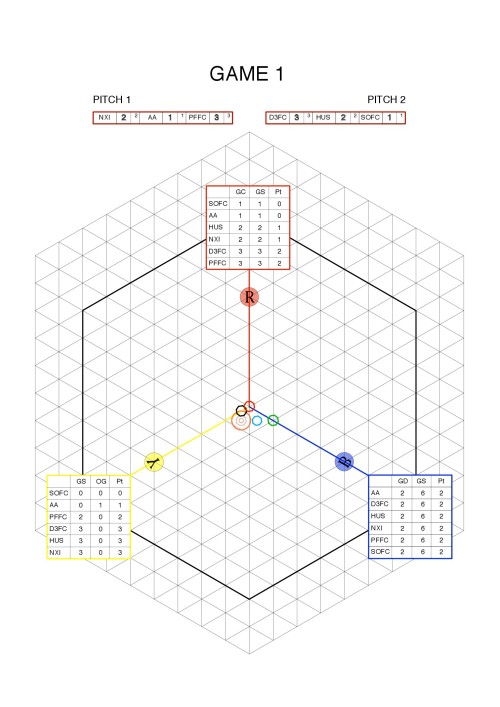