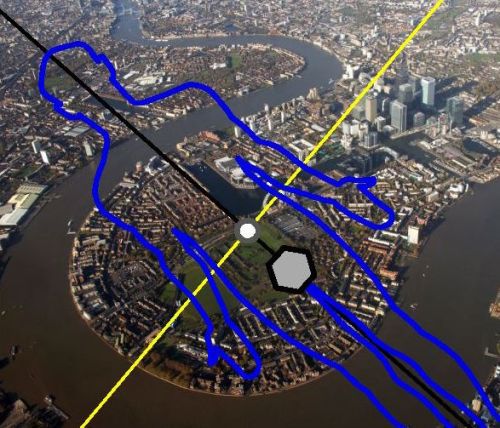 A workshop in practical triolectics, comprising an introduction to the triolectical system of Situationist artist Asger Jorn, conducted via the medium of three-sided football.
Jorn rejected transactional modes of knowledge transfer, favouring experimental activity. A supporter of the Situationist Bauhaus in Sweden, he believed such experiments fundamental to both psychic and social revolution. Underpinning Jorn’s approach was his unique ‘triloectical’ system. Developing upon dialectics and quantum physics, it went beyond linear transfers of energy, constructing spatio-temporal fields of possibility and negotiation. Not oppositional but superpositional – contradictions resolved by blending multiple simultaneous potentialities.

As a practical pedagogical exploration of the triolectical system, three-sided football stands in continuity with the aims of the AntiUniversity’s original protagonists, such as Jorn’s fellow ex-situationist, Alex Trocchi. The game has formerly been played at locations of psychogeographical significance around the world – from a forest at the centrepoint of Europe, to Taksim Square, to inside a Soviet fuel silo, to a druidic stone circle. This time we have selected the significant, if little known undulating terrain surrounding the Omphalos of the British Empire – constructed in the 16th Century by John Dee – as part of an ongoing campaign towards the psychogeographical unbinding of Eurocentric topological thought.

Strategic Optimism Football was founded in 2013 from the auto-dissolution of the University for Strategic Optimism, to work for the practical and theoretical advancement of triolectics. It recently contributed to constructing a patapositional supercollider at the geographical centre-point of Europe.

The Luther Blissett Deptford League was founded in 2012, by former members of the Workshop for Non-Linear Architecture. Besides its regular fixtures, it supports numerous international tournaments, including the 1th Three-Sided World Cup (Denmark, 2014).

To book: Contact strategic.optimism.football@gmail.com for information and to confirm attendance, or just turn up.

Philosophy go down in the dying seconds on pitch 1 and Hussaria march confidently ahead on pitch 2.

The renaming of Polsky Budowlancy – who now play as Hussaria – has brought instant dividends as the men in white now lead the RED table after two impressive performances. SOFC’s tactical cunning sees them still leading the YELLOW table while these early games are leaving the BLUE table too undifferentiated to draw conclusions. 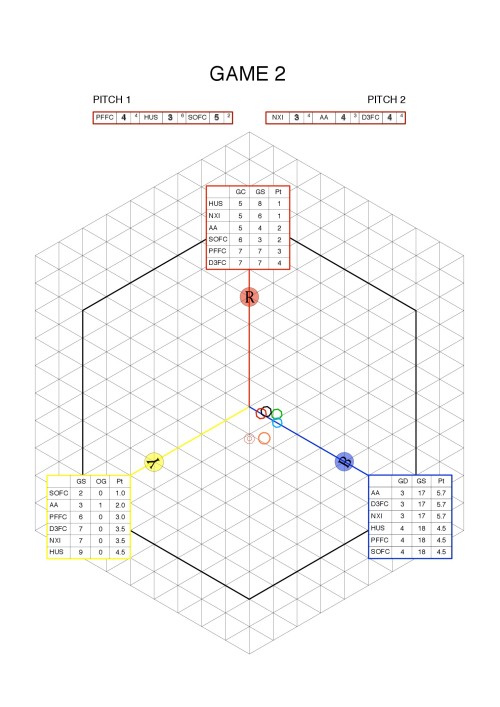 PFFC The Men in Red 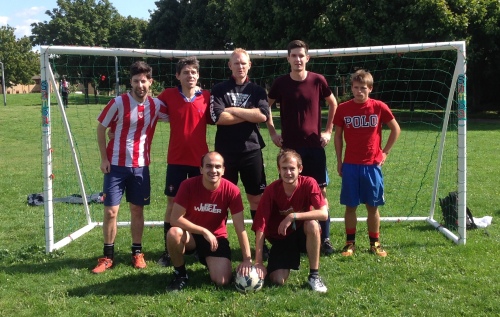 The two pitches in action

Two 3:2:1’s on Sunday, AA coming out the victors on pitch one and SOFC on pitch two. 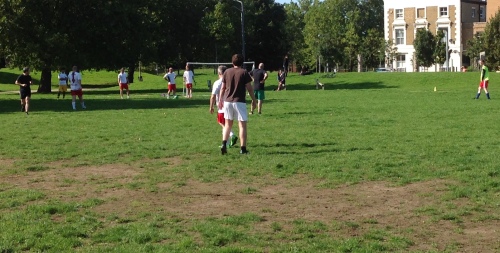 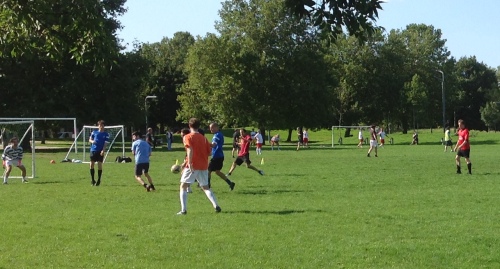 During the Alytus Biennale,  one of the sessions devoted to Triolectics focused on the LB3SFL and examined whether the way we play the game here in Deptford might be re-imagined. It was noted that although the playing of the game is dependent on triolectical gaming principles, the way we rank the scores is almost wholly dualistic and rational – winners and losers emerging from the tabular cumulative ranking of the scores.
A suggestion was made that we attempt to inject an element of the triolectic into the ranking system. A brainstorming session resulted in the idea of three separate ways of looking at the scores – which would create three tabular formats – one being the one we have used so far – based solely on a cumulative ranking of how many points you get from letting in the fewest games over the season – the second being a tabular ranking of the number of goals scored (with each goal scored being a penalty) – so the ‘winning’ team is the one who scores the fewest – or in other words is able to get the other two teams to be the most aggressive on your behalf – and the final being based on goal difference within games – so the spread results in a penalty. If your game ends 3.3.3 you get no penalties – if it ends 3.5.7 you get four penalties  – being the difference between 3 and 7. (this being akin to success in engineering equitability between all players)
It was suggested that with three outcomes and three tables – lets call them red, blue and yellow tables – these could be plotted in a triangular, ‘spatial’ format , rather than a ‘positional’ tabular format – and thus a situlogical separation of the teams could be recorded as a dynamic flow over the course of the season.
The proposals were put to a vote of all the players at the commencement of the new season and this experimental ranking system was accepted as long as it ran in parallel to the previous one adopted. This would allow a comparison of the two systems at the end of the season.

d3fc
Create a free website or blog at WordPress.com.